We have been manufacturing custom kitchens for 70 years. A great experience, ours, which derives from a long history, made of tradition and innovation. The craftsmanship and the technological research, in fact, constitute the concrete guarantee of quality and durability that has always been the distinguishing feature of our kitchens.
In the aftermath of a devastating war for Europe and for Friuli few have the strength and the courage to look beyond. And even less are those able to plan the future. Among these post-war pioneers there is Rino Snaidero, a one-of-a-kind Friulian, as was said and said. The young man decides to collect on himself the challenge of the times and what will then be the bet - won - of a life.
A bet based on the intelligence of the head and hands: on the virtue of work, in short. And so, in January 1946 , Rino does for the first time what he will do then always, for all his long life: he breaks with tradition by innovating. He then interrupts the family tradition and decides to become a craftsman and furniture manufacturer. But he does it by planting and inaugurating his laboratory behind his father's house, in Deveacco, a hamlet of Majano (Ud). And significantly, always in the same year, March 9, gets married, thus founding his own family.
At this point Rino sees renewing itself in itself the desire to create job opportunities and peaceful and stable prospects for their own villagers and, in the future, for their children. Without so running the risk - which until then was almost certainty - to see them all tomorrow leave and embark on the path of sacrifice represented by emigration. The business and family project are thus, in some way, to coincide.
In his first laboratory, Rino already employs sixteen people . In the early days only bedrooms are produced and then also the windows for the new housing units. The laboratory is not enough anymore. A new shed takes the place of what was the garden of Father Francesco and here they find new machinery that allow him to further refine the production. Which, as an artisan, passes to a first more fully industrial dimension, introducing the seriality. A house rented, again in Deveacco di Majano (Ud), is destined to be the first permanent exhibition of the company's production.
In 1959 , a truly crucial year for the company's history and development, Rino took three very important decisions. Creates the "Rino Snaidero & C.", transforming what was nominally still a laboratory into a real structured company. It definitively opted for the production of kitchen furniture only , thus optimizing and serializing the production lines from an already fully industrial point of view. It invests the savings set aside in one hectare of land in Majano (Ud), in what was then called Viale Europa Unita and now has the name of viale Rino Snaidero Cavaliere del Lavoro. And here, on January 9th, 1960, the company's new industrial plant was inaugurated.
If it is true that among the virtues of the entrepreneur and the pioneer as well as courage must be added to the foresight, Rino Snaidero quickly understands the changes taking place and the evolution of time and taste. In fact, a few years after the immediate post-war period, he realizes that the bedrooms are no longer a fertile commercial and research ground. They are the first American kitchens, those of new conception and modular, glimpsed in the magazines to light their imagination. The first appliances already upset the traditionally established order in the kitchen space. Therefore, - reflects Rino - must be reorganized according to a new order and a new anthropological criterion. And so, with this, this challenge will also represent the newest, and the most profitable commercial and research frontier in which, from now on, try your hand. And as protagonists. 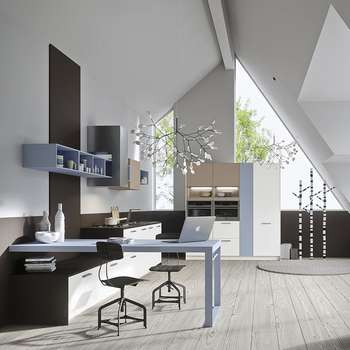 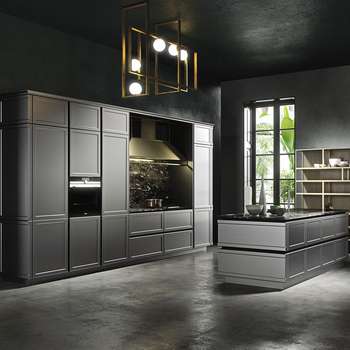 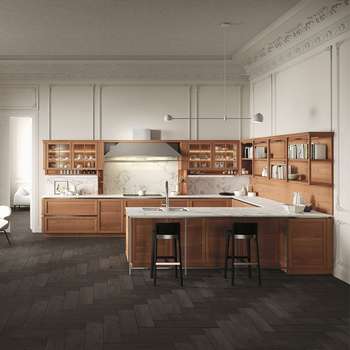 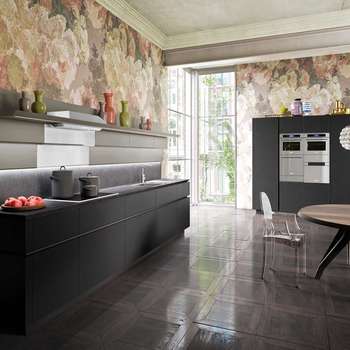